The GPA Top Individual Comic Volume Reports << https://comics.gpanalysis.com/market-reports/frequency-of-trade/gpa-top-individual-comic-volume-report-regardless-of-grade-progressive-monthly >> are included in the GPAnalysis.com Market Reports providing monthly and progressive lists. The progressive list displays the most frequently sold individual comics for the prior twelve months, regardless of the CGC grade or notes (universal, restoration, etc.). When sorted by the newly-calculated CGC Census %, the most-submitted comic of all time, Amazing Spider-Man #300 drops to the bottom of the Top 20 Modern, indicating that the prior twelve months of GPA recorded sales are not unusually high percentage-wise, despite the volume of sales recorded. Amazing Spider-Man #361 (1992) has a 12% Census % for the prior twelve months, reflecting the increased market activity coinciding with the 2021 Venom 2 movie, debuting the live-action Carnage character first featured on the ASM #361 cover in 1992. Venom: Lethal Protector #1 (1993) has a Census % of 13% also coinciding with the Venom 2 movie advertisements and release.

By applying the CGC Census counts and calculated Census % to the GPA Top 20 individual comic volume lists for older comics, the recently-printed issues will be excluded. Time-specific trends related to the external influences of movie production, streaming series, and box office releases should be discernable among the comics which are simply sold most often because they are graded most often. The Top 20 Bronze Sellers (progressive) is dominated in Census % by Eternals (1976) and Special Marvel Edition #15 (1973) at 20% to 22%, reflecting the popularity of the Eternals and Shang Chi movie releases at a higher percentage than that of Venom and Carnage at 13% and 12% in the Modern category. The CGC Census for Venom: Lethal Protector #1 and Amazing Spider-Man #361 is much higher than issues of Eternals and Special Marvel Edition, and the corresponding percentage of sales in the prior twelve months is lower.

The CGC Census reflects just over 20 years of CGC grading, so it would be expected that a 5% sales percentage in 2020-2021 would reflect one-twentieth of that CGC Census. Attention is often given to Incredible Hulk #181 in the Bronze Age marketplace, however, the Census % for the prior twelve months is only 5%, indicating that market activity for the book is not significantly greater than in prior years or unexpected for a twelve-month period of sales activity. Likewise, Amazing Spider-Man #129 and Giant-Size X-Men #1 also reflect 5% for the prior twelve months. None of the Top 20 Silver Sellers reflect a CGC Census % of 20% or higher. All of the Top 20 Silver CGC Census % of at least 10% coincide with Marvel cinematic or streaming productions. Avengers #48 features the Black Knight, included (however briefly) in the Eternal movie. Avengers #8 is the first appearance of Kang, featured in the Loki streaming series. These top two by Census % feature characters which have made their live-action debuts in 2021 Marvel productions. The next three comics are associated with planned or rumored live-action Marvel characters, Fantastic Four #67 and Thor #165 are best known for their connection to Him / Adam Warlock, teased by Marvel movies, and Silver Surfer #3 features Mephisto, which was rumored as part of the WandaVision streaming series but did not appear.

The most valuable Silver Age comic is Amazing Fantasy #15 (1962), but the number of sales in the prior twelve months are not high enough to make the GPA Top 20 Silver Sellers list. A manual count of the number of sales for Amazing Fantasy #15 in the prior twelve months is 138, which is just under 4% of the CGC Census for the issue. 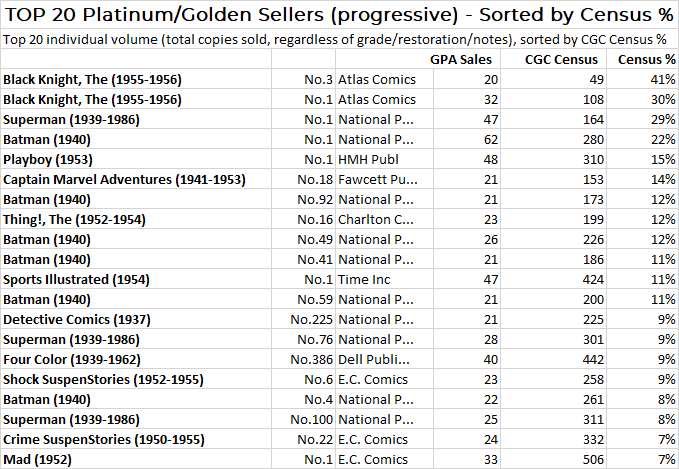 While the highest Census % for the Top 20 Platinum/Golden Sellers is associated with Black Knight issues, coinciding with the Eternals movie release, it is quite surprising to see Superman #1 (1939) and Batman #1 (1940) with over 20% of the CGC Census copies changing hands in the prior twelve months. Superman #1 (1939) has 164 copies on the CGC Census, and GPA has recorded 47 sales between November 2020 and October 2021. Further investigation into these two issues and GPA recorded sales reveals that vast majority of the GPA recorded sales were for individual pages of these issues. These individual pages are CGC graded but are not recorded in the CGC Census counts. The CGC label for individual pages of comic books are “NG” for “No Grade”, but such pages are recorded in GPAnalysis as CGC 0.5 with the individual page noted by GPA. Excluding the issues which reflect individual page sales, the Top 20 Platinum/Golden Seller sorted by Census % indicates the significant percentage of the CGC Census changing hands for Black Knight, followed by a 15% calculation for Playboy #1 (1953). Unlike comic books, CGC began grading issues of Playboy magazine in 2009, and the 15% calculation for the prior twelve months is not comparable to one-twentieth of the CGC Census (as it would be for a comic book). Instead, approximately 8% of all CGC graded copies of Playboy #1 were graded in the prior twelve months, so the 15% of the whole CGC Census recorded as GPA sales is approximately twice as many copies as the CGC Census increase. Sports Illustrated #1 (1954) is comparable with a CGC Census % of 11% over the same period of time.

Because the volumes (number of sales) for each individual comic (and some non-comics) determines the Top 20 lists in the GPA Individual Comic Volumes reports, the number of sales are not comparable across the eras. The top volume for Modern is 2,741 sales in the prior twelve months, while the top volume for Silver is 481, and these are not a “fair comparison” due to the numbers of copies that exist for these books. However, the CGC Census % (calculated percentage of the CGC Census which is represented by GPA sales volume) is comparable across the eras.