Continuing the exploration of the CGC Census, this month the focus is second issues. Most titles see a significant decrease in both the value and the number of CGC submissions for issue #2 when compared to issue #1.

The year 1999 was chosen for two reasons. First, 1999 is prior to the start of CGC grading. Second, a significant increase in the number of comics produced with #1 on the cover has occurred since 1999. This increase corresponds with the increase in the number of variants produced by publishers. First issues of comics with dozens of variants are separated issues in the CGC Census, with each having #1 on the cover.

1,546 different #1 issues with at least ten CGC submissions from 1999 or earlier do not have a corresponding #2 issue in the CGC Census. These #1 issues without a corresponding #2 may represent titles which were one-shot (only one issue was published), alternate covers which were only created for #1 issues (gold, platinum, special edition), or relatively unpopular titles where the second issue has not been submitted to CGC at all. The #2 issue must have the same year or one year later than the #1 issue, to ensure it is the second issue in a series, rather than a much later continuation or a reprint of issue #1. 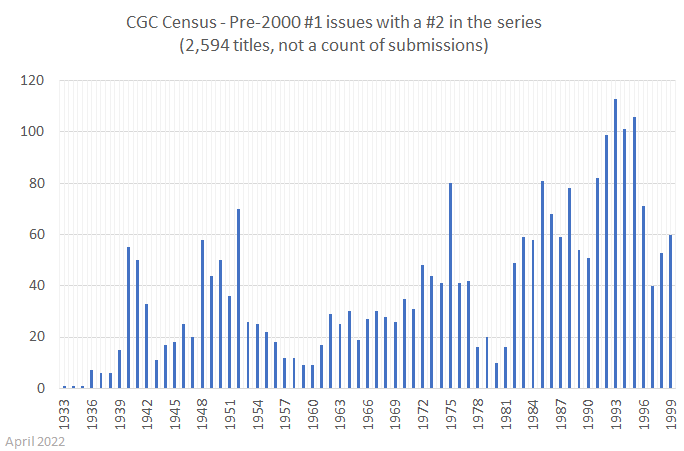 For the 109 one-two combos where issue #2 has more CGC submissions than issue #1, there are 18 which occur in the years 1951 and 1952. These 1951-1952 titles include Crime Mysteries, Crusader from Mars, Journey Into Fear, Mister Mystery, Prison Break, Silly Symphonies, Space Adventures, Space Busters, Space Detective, Tales of Terror Annual, Teen-Age Temptations, This Magazine is Haunted, Two-Fisted Annual, Weird Mysteries, Weird Tales of the Future, Weird Terror, White Princess of the Jungle, and Witches Tales. Other independent publisher comics from the 1980s in the 109 one-two combos with issue #2 CGC submissions exceeding issue #1 are Albedo #2, Alien Worlds #2, Starslayer #2, Teenage Mutant Ninja Turtles #2, and Vanguard Illustrated #2. Dave Stevens artwork is featured for issue #2 (but not issue #1) of Alien Worlds, Starslayer, and Vanguard Illustrated. Besides artwork preferences, the most common reason for modern age issue #2 to exceed the number of submissions of issue #1 is the first appearance of a new (or more popular) characters in issue #2.

More in-depth analysis would be needed to determine how often issue #2 has a higher value than issue #1. Known examples of higher issue #2 value from titles mentioned in this article are Albedo #2, New Teen Titans #2, Primer #2, San Diego Comic Con Comics #2, Starslayer #2, Vanguard Illustrated #2, and X-Force #2, but the GPAnalysis recorded sales averages are not remotely comparable for Superman #2 or Teenage Mutant Ninja Turtles #2, compared to the #1 issues in the same CGC condition.